Three balconies at the Shipp’s Landing Condo, Marco Island, Florida, were selected by the Board and their engineering consultant, for a demonstration of the SURTREAT® concrete reinforcing steel corrosion evaluation and inhibition processes.

The balconies were selected for the evaluation program due to some delamination indicating the presence of corrosion.

SURTREAT® is a proprietary, water based, environmentally friendly solution of activators and migratory aids that inhibits rebar corrosion, increases strength and reduces porosity in reinforced concrete.

Each balcony was prepared by removing the surface coating and removing and replacing spalled concrete. A small section of rebar was left exposed for making half-cell corrosion measurements.

Per the described plan, concrete samples were taken for chloride and pH measurements. The half-cell potential was measured in the area surrounding the exposed rebar, and the concrete strength was measured using an impact hammer. The results of these tests are recorded in Table I.

After testing, TPS-II was applied to the three balconies along with water to aid in penetration. The quantity of TPS-II applied is recorded in Table I.

Impact hammer measurements showed that the balcony concrete was in the 5000-7000 psi range, which means that it has a low cement porosity. This coincides with the high pH (12) measurements at the surface and the relatively small amount of TPS-H required to saturate the cement phase.

Half-cell measurements were made on balconies 1023 and 1420 and were just above the silver chloride half-cell corrosion threshold level of —250 mV. There is, though, a significant difference between the high and low readings (-250 mV vs. 45mV) for balcony 1420, which means that there are anode cathode differentials which could be indicative of corrosion.

The first application of TPS-II was made to balcony 1023. When the application of 4 gallons at a rate of 137ft/gallon was completed, it was realized that this was an excessive amount in relationship to the concrete porosity, since there was excess TPS-H on the surface which had to be removed. The rate and method of application were modified for balconies 1420 and 1920, reducing the application rate down to 245 ft2/gallon and 366 ft2/gallon respectively, and applying water first to prime the surface.

When TPS-II was applied, a network of cracks became visible on the surface as a result of significant product penetration in these areas. These cracks can be seen by examining Photos 3 and 4. All of the balconies showed the same micro-cracked condition.

It is concluded that water, salt and air are penetrating the balcony surfaces primarily through these micro-cracks and creating spot conditions conducive to rebar corrosion. This was confirmed by the half-cell measurements showing small isolated corrosion “hot spots.” Most of the TPS-II penetration is through these cracks which is where it is needed.

Based in physical examination and the present test results, there is a definite need to take action to prevent further rebar corrosion-related deterioration. Low-level ocean front balconies which have a higher chloride content are prime candidates for immediate attention. Since most penetration in through the network of micro-cracks, the TPS-ll application rate will be modest. Higher rates should be used on lower-level balconies (floors 2-10) versus higher level (10-20). 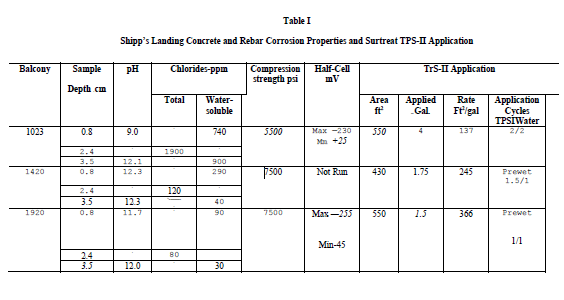