Three structures were selected during the 2006 inspection and identification process. Two were patrol bridges. The third structure was a ring girder in a Warehouse Building at Naha Military Port.

The bridges are designed crossing run-off spillway from the nearby Kadena Airforce Base. While empty on the days when the weather is dry, spillway is full of rushing water taking the excess to the ocean during rain. It is intermittently full or empty depending on weather conditions. For this reason, the location is considered aggressive corrosive.

All structures were selected with the following criteria –obvious symptoms of the imbedded steel corrosion (delamination and cracking), continued aggressive corrosive environment over the time.

SURTREAT® is a proprietary, water based, environmentally friendly solution of activators and migratory aids that inhibits rebar corrosion, increases strength and reduces porosity in reinforced concrete.

Culvert #2 corrosion data over time is summarized in the graph below representing the average of about 90 measurements from three separate sections on two separate bridge supports. 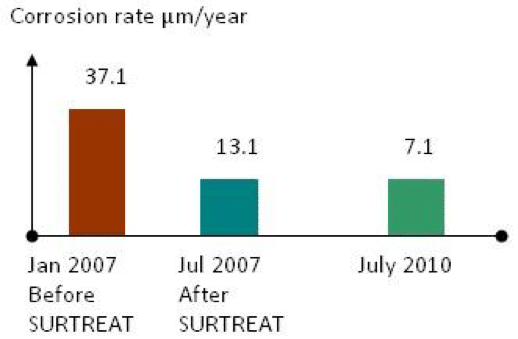 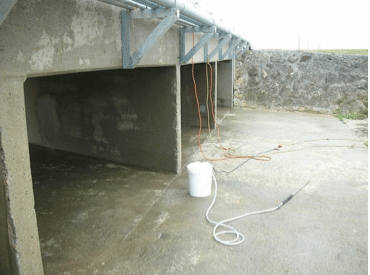 Following SURTREAT® application in January 2007 the rate of corrosion of the imbedded rebar has declined. This decline was sustained over time.

Culvert #2 water permeability data is presented in the graph below. The data is the average of measurements taken from two separate bridge support locations before and after application of SURTREAT®. 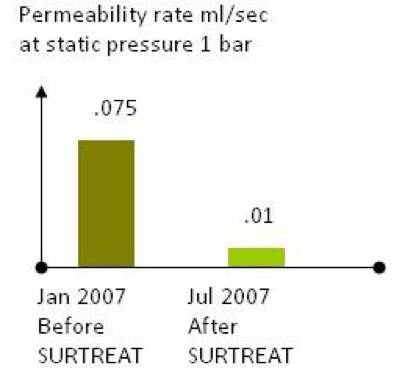 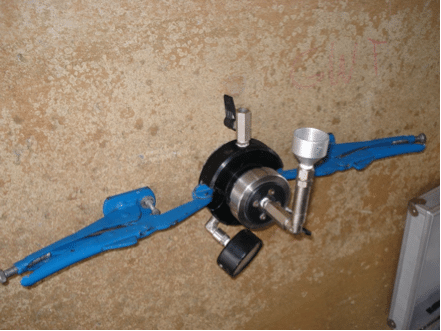 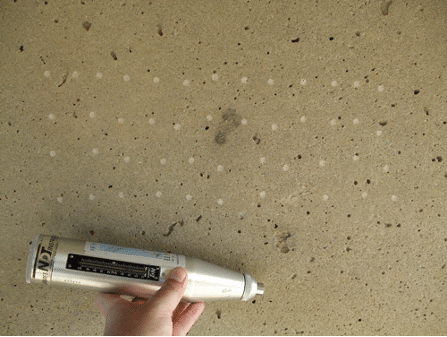 Following application of SURTREAT® in January 2007 water permeability rate has declined. The decline was sustained over time.

Culvert #2 concrete strength was estimated by the means of a rebound hammer. In January 2007 (before SURTREAT®) the average of 30 strokes on a randomly selected bridge support

Section 1 corrosion data over time is summarized in the graph below representing the average of about 90 measurements spaced throughout the entire beam area. 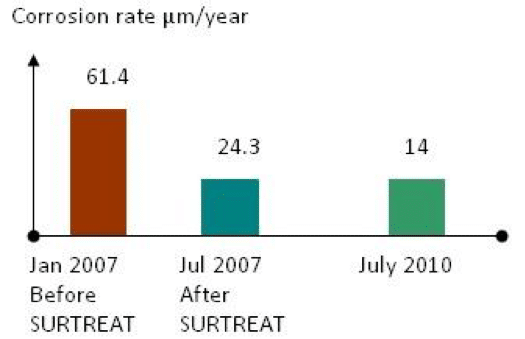 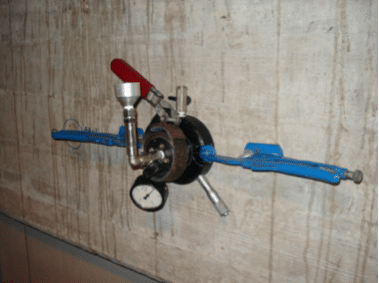 Following SURTREAT application in January 2007 the rate of corrosion of the imbedded rebar has declined. This decline was sustained over time.

Building 306 Section1 water permeability data is presented in the graph below. 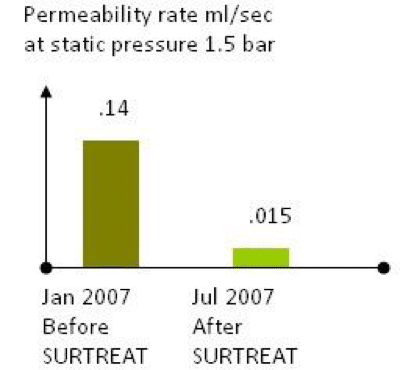 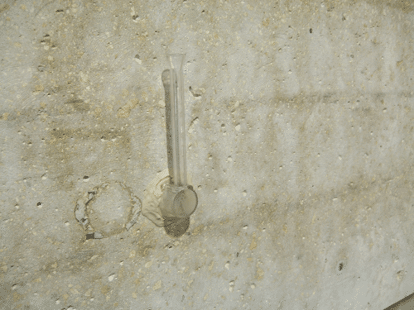 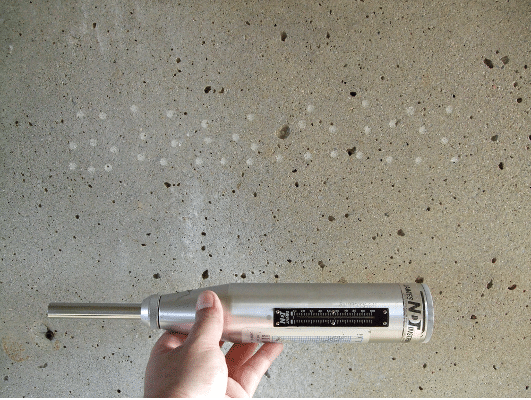 Building 306 Section 1 concrete strength was estimated by the means of a rebound hammer. In error the “before” measurement was taken from the Section 2 of the ring girder beam. The section did not receive SURTREAT and is currently under coating. The “before” January 2007 measurement on Section 2 (random area 30 strokes) averaged 3,000 psi. In July 2010 the measurement taken on SURTREAT treated Section 1 of the ring girder beam (random area 30 strokes) averaged 6,000 psi. It is common to see concrete strength increase following SURTREAT application. BUILDING 306 Section 2

Building 306 Section 2 is a designated installation area for the NASA galvanic liquid coating. Applied to the concrete surface, acting as a type of cathodic protection, the coating components are designed to corrode preferentially when connected to the imbedded rebar. Data was collected in July 2007 and in July 2010. With some variation it showed that an electrical current was being generated by the coating. Also, there was an increase in rebar corrosion rate once the coating was disconnected. Both of these phenomena point to the coating functioning as intended. The difficulties associated with the evaluation included the suspected presence of an unknown short within the system in disconnected” state, suspected interference from the system as electrical measurements were being taken, scarcity of the established “tried and true” field evaluation procedures. For more technical data and data analysis on the NASA galvanic liquid coating please see the July 2007 Elzly Technologies report made part of the published US Army CERL project report (ERDC/CERL TR-09-27), September 2010 Corrpro report and 2008 ERDC/CERL TR-09-27 report.

Based on the results of the three-year evaluation, components of the SURTREAT system were found to be functioning as intended. Procedures designed to evaluate the performance of the NASA galvanic liquid coating in the field need to be refined.